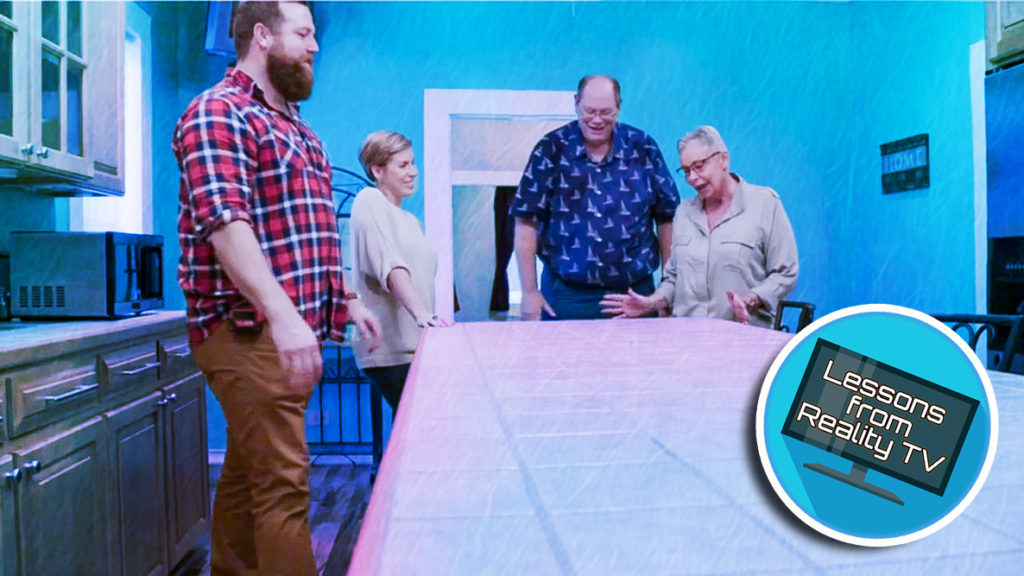 “Home Town” stars Erin and Ben Napier love giving old homes new life—but sometimes those houses need a lot of extra love before they can function for a new family.

In the latest episode of their show, “Something About a Porch,” Ben and Erin have a long list of requirements and renovations to accomplish before their newest clients, Jack and Sandy, can move in. This includes reconstructing an old porch, updating the home with easy-to-use features for aging in place, and, perhaps the biggest project of all, flipping the home’s layout.

With so much work to be done, will Sandy and Jack be able to move in on time? Read on to find out what exactly a “dog trot” layout looks like, and also to learn why kitchen islands may have one glaring downside (really!).

When Jack and Sandy first see their new home, they love the large front porch, but as Ben explains, it has room for improvement.

“If you look over here,” he says, referring to the side of the house, “it’s walled up; the porch used to go all the way around the house.”

At one point, the porch was closed off, so a ramp could be installed on the side, but Sandy and Jack don’t need a ramp. What they need is a show-stopping porch.

So, Ben and Erin bust down that wall and bring the porch back to its former glory. By the time the house is finished, the porch is opened up, stretching 360 degrees around the house.

It looks amazing, and best of all, Jack and Sandy love it.

“I wanna sit on that porch today,” Sandy says when she sees the home. “I don’t care if it’s 30 degrees out.”

Add shutters for a rustic vibe

Erin and Ben put in a lot of work to transform the exterior. They update the porch, center the front door, and add a new coat of paint to brighten the house. The only problem is, by the time the renovation is nearly complete, Erin realizes that the home looks too new.

So, to add a bit of a rustic quality back to this Southern home, Erin decides to add some wood shutters to the door. These add some color and character to the house, and they accentuate the beautiful new front door.

Of course, the new homeowners love the addition. “That really makes a statement,” Sandy says.

When Sandy and Jack first see this Southern-style home, the layout is a little awkward. The living room and kitchen are on the right, while the bedrooms are on the left. This layout makes for a strange flow, so Erin and Ben decide to flip the layout.

They put the kitchen and living room at the front of the house, with the bedrooms in the back. They also line up the front and back doors to make what Erin explains is a dog trot layout, with a central breezeway that connects the two sides of a home.

With this flipped layout, the entryway gets an impressive makeover, which Erin decorates with an elegant blue-and-white wallpaper.

“Because we made this a dog trot-style house, you’ve gotta have this grand entrance, and in a grand Southern home, that entrance has got to have wallpaper,” she says.

Skip the kitchen island in favor of a table

To Erin and Ben’s surprise, Sandy says she’s not at all interested in a kitchen island. While islands have become very popular in recent years, Sandy says that she’s had bad experiences running into them and getting bruises on her hips.

So, Erin makes plenty of counter space instead, and there’s still room for a kitchen table.

Not only is the table beautiful, its drop-leaf construction means that Sandy and Jack can accommodate guests, or shrink it down when it’s just the two of them.

The color change gives the kitchen character and dimension. In addition, it matches the beautiful kitchen table.

A zero-entry shower is ideal for aging in place

Sandy and Jack are looking to settle down in this home for a long time, so they’re going to need accommodations, especially in the bathroom, for the point when their abilities change with age.

Of course, Erin and Ben know exactly what to do. They create a beautiful new bathroom for the couple, making sure to install a zero-entry shower, so that Jack and Sandy won’t have to step up to get in. It’s an elegant and functional bathroom.

Is this house a ‘Home Town’ hit?

With a new kitchen, a renovated porch, and a fabulously functional new bathroom, Ben and Erin were able to finish this home under budget, bringing Sandy and Jack’s total investment to just $215,000. Clearly, all of Ben and Erin’s “Home Town” TLC has definitely paid off.